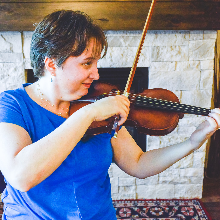 NOW ACCEPTING STUDENTS FOR MY WAITING LIST IN TOOELE, UT. Ages 5 and up. Cami began violin lessons at age 5 and continued until she earned a Master\\\'s degree in Music Education from the University of Northern Colorado. She has participated in the top ensembles at BYU and worked as a Professional Strolling Violinist at Busch Gardens. Cami was selected as concertmaster of various orchestras, including the Utah All-State Orchestra and World Youth Symphony Orchestra at Interlochen, MI. She is a winner of the Utah ASTA Competition and placed third at the Utah State Fair Music Competition. Mrs. Shaskin has enjoyed recording with the Tabernacle Choir at Temple Square as a member of the Orchestra at Temple Square for over twenty years. She loves working with her private students and seeing them excel, not only in music, but as Shinichi Suzuki said, as \\\"good citizens\\\" with \\\"beautiful hearts.\\\"

As a college freshman, Cami was one of ten musicians from the United States selected for participation in a collegiate-level group to rehearse in Germany and perform throughout Europe for ten weeks in 2001, all-expenses paid upon arrival. The year before, she was one of four freshmen to be accepted as a Violin Performance Major at Brigham Young University. Following graduation from college and before beginning a career in teaching, Cami was hired as a violin soloist to perform over 320 shows in one summer with a backup band, dancers, singers, etc. at Busch Gardens in VA, having the distinction of being the performer paid to relocate from the farthest distance. Cami was a 14-year-old section leader the year her high school orchestra performed in Carnegie Hall. She played in the top ensembles my universities had to offer as an undergraduate and graduate student in Utah and Colorado. The winner of the Emerson Scholarship for Utah (one winner for every U.S. state) to cover all costs of attending the $4,000+ prestigious eight-week Interlochen Arts Camp in 2000, she was voted by her peers each week to retain her seat on the front stand of the top group, the World Youth Symphony Orchestra, practicing and performing a new full-length concert of professional symphony repertoire every week with guest soloists such as pianist Andre Watts and violinist Schlomo Mintz. Cami played in a string quartet in high school and college for seven years; they gave recitals and recorded CD’s and even in their formative years, received regular invitations to perform at college graduations in addition to many weddings and other special events. She has volunteered her time to assist the Orchestra at Temple Square as a violinist for the past twenty-three years: in essence, growing up with the Tabernacle Choir.

Currently taking even more training to enhance my performing skills, both within the Suzuki family and elsewhere

Sought after as a performer locally

I was a Suzuki kid myself, beginning at age 5, participating in Federation, ASTA, and state and national adjudicated auditions or competitions along the way. I successfully graduated from the program after completing Violin Books 1-9 just prior to enrolling in high school. I highly recommend this approach especially for ear training, though, with the right teacher, this line of study does not have to preclude becoming an excellent orchestral sight reader as well!