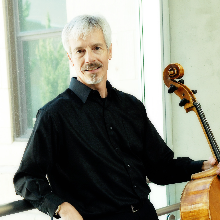 Cellist Elliott Cheney holds Bachelors, Masters and Doctoral degrees in cello performance from the University of Texas, where he studied with Phyllis Young, and also studied at the Hochschule für Musik Detmold, with André Navarra. He has been the Principal Cellist of the National Symphony of Costa Rica, and The Savannah Symphony, and has been on the faculties of the University of Costa Rica, Southwestern University, Armstrong College and the University of Tennessee, Knoxville. He is currently on the music faculty at the University of Utah. Elliott is active as a solo cellist, and has performed concertos by Saint-Saens, Dvorak, Haydn, Tchaikovsky and Vivaldi, as well as the Brahms Double and Beethoven Triple Concertos. In addition, he has recently performed over two weekend concerts, the complete solo Suites by J. S. Bach. Elliott is also in demand as a teacher and clinician at festivals and institutes. His performing and teaching activities have taken him to Hawaii, California, Nevada, Oregon, Utah, Colorado, Arizona, Texas, Oklahoma, Wisconsin, Illinois, Kentucky, Georgia, Alabama, North and South Carolina, Louisiana, Florida, New York, Ohio, Canada, Brazil, Costa Rica, Spain, Germany, Austria, Switzerland, Italy, France and Mexico.