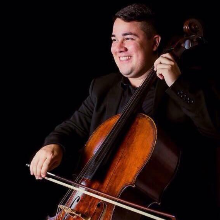 Marcos Rangel grew up in Rio de Janeiro , Brazil and moved to Herriman, Utah in 2020 to begin his family. He has been teaching cello classes since 2011. Worked as a cello teacher for many programs in Brazil, such as, Aprendiz Musical, Music na Rede and Ação Social pela Musica no Brasil. He is an experienced teacher for individual and group classes. He is a passionate and dedicated cellist currently working with cello and music education classes. Experienced in orchestral and chamber music settings as an active cellist. Committed and reliable team player who seeks respect and fellowship among everyone in both the learning and work environment.

He began piano classes at age of 10 with Andre Moura. At the age of 13, he changed to cello classes with Lenie Vieira and Marcelo Salles. Cello became his new passion and occupation. In 2014, he got his Bacherlor’s degree in Music: Performance in Cello by the Federal University of Rio de Janeiro, Brasil. In 2016, he got his degree in Music Licensure by the Candido Mendes University in Rio de Janeiro, Brasil. In 2019, he got his Post-Graduate degree in Music Therapy by UNIBF Paraná, Brasil. His cello skills have been enhanced by many cellists around the world. In Brazil, his native country, he studied with Hugo Pilger (UNIRI0) and Marcelo Salles (principal cellist of the City Hall Theater). He participated in many Master Classes with:  Fabio Presgrave (UFRN), Claudio Jaffe (Palm Beach Symphony), Annie Francis Bauless (Utah State University), Dane Johasen (The Cleveland Orchestra), Elise Pittenger (UFMG), Bernhard Löecher (Germany), Martin Ostertag (Germany), RollandPidoux (French), Gavriel Lipkind (Israel), Nina Kotova (Russia).

In 2012, Marcos was selected as a student for the Instrumenta Oaxaca, one of the most important Music Camp in Mexico. In 2013, he took one chair on the 37º Deutch Skandivavischer Orquestrewoche in Berlin – Germany, with the final concert in the Berliner Philharmonie. From 2018 to 2020, he became a cellist in the Espirito Santo State Orchestra in Brazil, where he played as principal cellist for several concerts.

In 2020, He became a Suzuki Cello Teacher being trained by Shu-Yi Scott and Tanya L. Carey. He teaches in person (in his students’ homes or in his home) and remote (using conference platform of students’ choice).