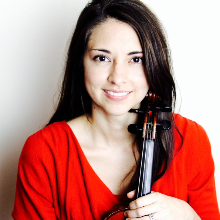 Rachel Bower Karr grew up in Salt Lake City, Utah studying violin with Suzanne Barraclaugh, Deborah Moench, Leonard Braus, and Eugene Watanabe. She went on to study with William Preucil, Jr. and Stephen Rose at the Cleveland Institute of Music graduating with a Bachelor\'s and Master\'s in Violin Performance. She also graduated with a Master\'s in Suzuki Pedagogy from the Cleveland Institue of Music studying with Kimberly Meier-Sims.

Mrs. Karr has been teaching the Suzuki method in the Salt Lake and Davis County areas for 13 years, with teaching experiences in Ohio and Hawaii as well. Her teaching experience includes 11 years at the Gifted Music School in Salt Lake City. She has taken extended and enrichment training from the top Suzuki teacher trainers nationally and internationally, including John Kendall, Edmund Sprunger, Cathy Lee, Carey Beth Hockett, Richard Mooney, Charles Krigbaum, and Alice Ann O\'Neill.

As a performing violinist she has played in the Honolulu Symphony and is a member of the Ballet West Orchestra. She is also often involved in recordings and performances for various artists and has done many recordings for video game music.